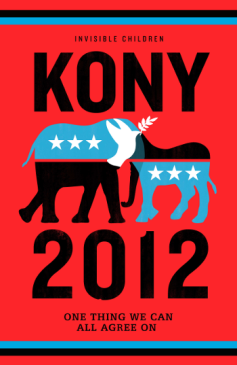 What: Kony 2012 is a film created by Invisible Children Inc. The purpose of the film is to promote the charity’s ‘Stop Kony’ movement in order to arrest the one of the worlds worst war criminal, Joseph Kony, in 2012.

The film documents the organization’s plan and efforts to arrest Kony. They describe Kony’s guerilla warfare and the rough conditions in which kids in Central Africa are being abducted from their families and turn into soldiers ordered to kill even their own family members who resist.

How: The film has Spreads virally since its launch in March 19th 2012. It has over 83 million views on Youtube and over 16 million views on Vimeo. The powerful exposure of the video has caused the Project to gain widespread popularity in no time. A number of celebrities and politicians have began to endorse the campaign. On April 20, 2012, as part of the campaign, supporters will put up posters promoting Kony 2012 in their hometowns. Invisible Children offers posters from an online shop in an attempt to gain wider recognition. They have also created action kits to help spread awareness that include campaign buttons, posters, bracelets, and stickers. 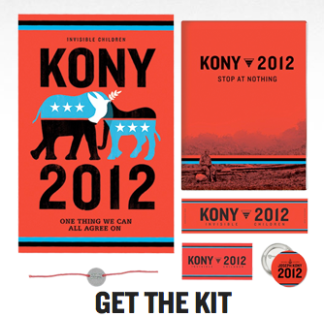 Response: like in any big project, there are good and bad reviews.  The criticism linked to the organization question the credibility of the facts and state that some facts may have been manipulated in an exaggerating manner. Even though the campaign has the right aim promoting global activism, it is being criticized for painting a black and white picture of the situation.

Despite the criticism, the cause has received a lot of attention and support. The campaign was able to gain international recognition due to the peoples’ concern that rapidly spread through the wed, creating a global community, whose aim to try to make a difference. Even though the organization has existed for several years now, it is recently that it has been able to gain such attention, millions of people have protested the cause, donated money and shared their concerns not only online but on the streets as well.

One thought on “KONY 2012 by Veronica Maitin”